According to Wikipedia, 'synchronicity is a concept first introduced by Carl Jung "to describe circumstances that appear meaningfully related yet lack a causal connection." Jung held that to ascribe meaning to certain acausal coincidences can be a healthy, even necessary, function of the human mind - principally, by way of bringing important material of the unconscious mind to attention. This further developed into the view that there is a philosophical objectivity or suprasubjectivity to the meaningfulness of such coincidences, as related to the collective unconscious.'

Given our working hypothesis that Samara may be an archetypal being that exists in the collective unconscious, and yearns to emerge through the early Samarans, it seems worth paying attention to the synchronicities and serendipities occurring around the time of her coming into our conscious awareness.

Hilma af Klint (1862-1944) was a Swedish painter and mystic whose paintings resonate in a strange way with Samara. Her work predates the first purely abstract compositions by Kandinsky, Klee or Mondrian (!) and we came across Hilma Af Klint after the first call with conscious coach, Emily Lane, who uses the image known as Group X, No. 1, Altarpiece (1915) in her work to represent the yin (the circle) and yang (the triangle), and has a print hanging on the wall behind her during video calls.

Below are some highlights of Hilma af Klint's work - be sure to view the introductory video in the presentation.

Joachim Stroh happened to see the exhibition at the Guggenheim in New York City at that time and stood (for several minutes) in front of the very same painting that Emily Lane had used to explain the Being and Doing energies of Samara.

According to this website, "The three Altarpiece works were the final series in the 'Paintings of the Temple' collection and are possibly inspired by Theosophy’s version of evolutionary theory, in which evolution occurs in two directions, elevating from the physical to the spiritual and descending from the divine to the material world." 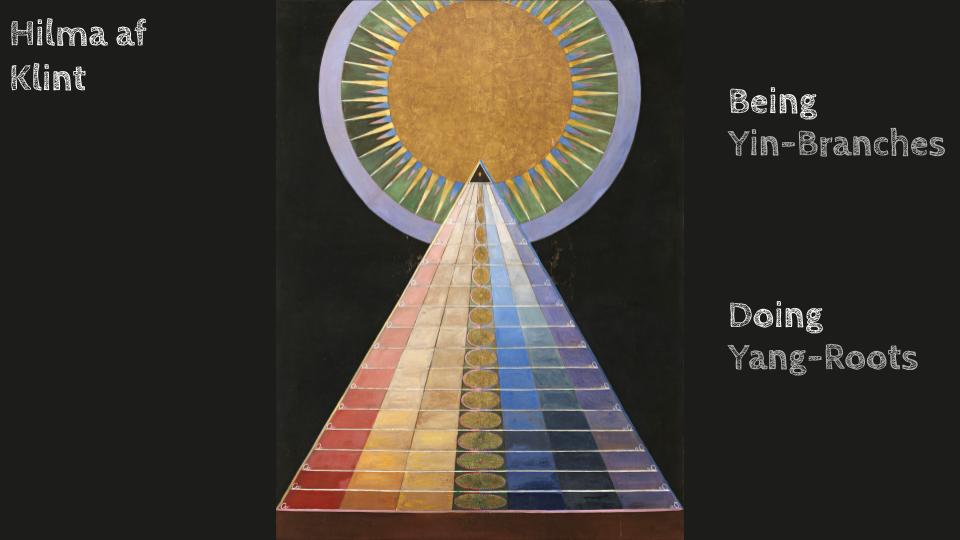 In late March 2021, we were trying to purchase the domain name samara.earth, but were surprised and disappointed to find that it had already been taken. Rieki did some quick sleuthing and found that it had been acquired by a Gabriele Seewald of Taiwan in January 2021. I (Roz) offered to contact her via LinkedIn.

To cut a long story short, Gabriele turned out to be passionate about the Samara name, which had come to her via a friend who had been practising Yoga of Samara, allegedly arising in the Samara Valley of Russia. (I have not been able to verify the existence of the yoga practice, but there is indeed a Samara Valley, the site of an ancient culture [1]).

Gabi, a deeply spiritual woman, has a strong sense that Samara is an emerging being, connected with Mother Nature or Gaia, who is going to manifest in various forms across the world at this time. She was not at all surprised to hear from me, and to find that our Samara, like her Samara (a health centre in her native Austria) is rooted in the idea of a regenerative civilisation.

Our conversations with Gabi are still continuing as of April 2021, and future collaboration seems likely, as we continue to explore what this Samara-being longs to become.

The original proposal to bring in the conscious leadership mentor, Emily Lane, failed due to Samara's then lack of a proper governance process for bringing a proposal. When Roz and Emily set out to pencil in dates for the revised proposal, once our governance process had been put in place, they sketched out a series of workshops to take place on Wednesdays during May 2021.
By beautiful synchronicity, it just so happened that the third and final workshop, the Integration Ceremony and Ritual, falls at the exact time that the moon will be at its closest to the Earth in 2021, a supermoon known as the Super Flower Moon. There is also a lunar eclipse at the same time, which will be visible around much of the Pacific Rim [2].
[2] https://www.timeanddate.com/eclipse/lunar/2021-may-26
Previous
The Spaces of Samara
Next
The Roots, Trunk and Branches of Samara