The Fruit of Samara

A maple seed falls in a characteristic helical motion; the shape of a helix; spiral.

When I (Trent) was younger, I always loved playing with samara seeds. I would collect them up – careful not to damage them, and drop them from the highest place I could find. Noticing as they topple for just a moment then, with an almost eerie certainty, "floop!" right into rhythm copter-ing gently on down... landing softly on the grass as I swiftly released the breath I'd been grasping onto. Phew! Relief. Softness. Stillness. Safety. Certainty. 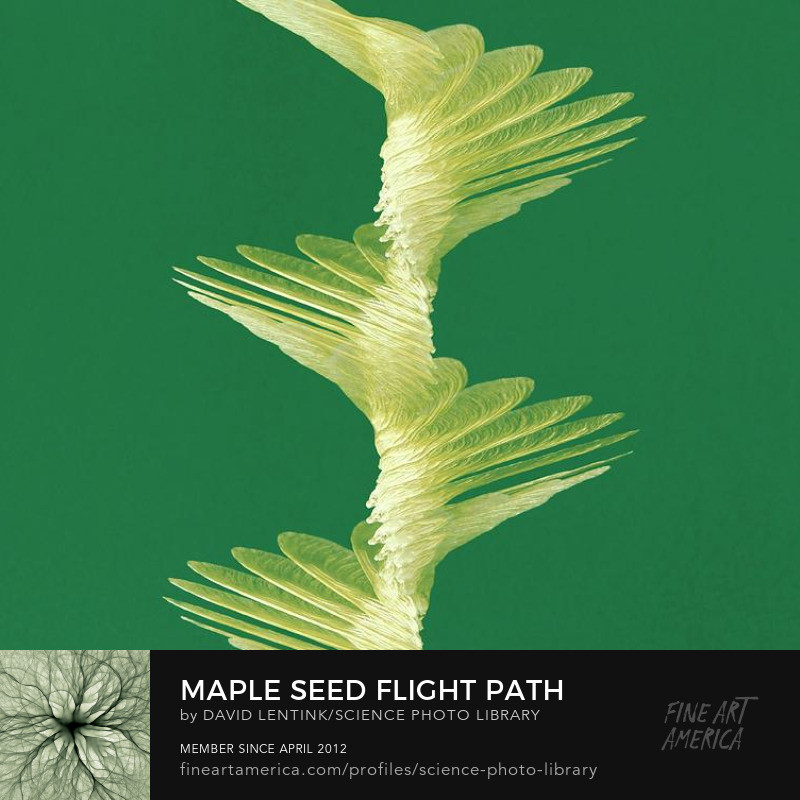 It appears the "initial transition from rest to a steady gyration" occurs in three steps:
#First a tumble about the span-wise direction, followed by a tilt towards the vertical axis,
#Second leading to the gyration about the vertical axis and an opening of the cone angle before #Third finally settling into a steady state descent towards Planet Earth.

There is Peace within that Patience.
There is Joy & Excitement, anticipating each samara's transition to its own personal fall,
it's own transitional drama into the ground. 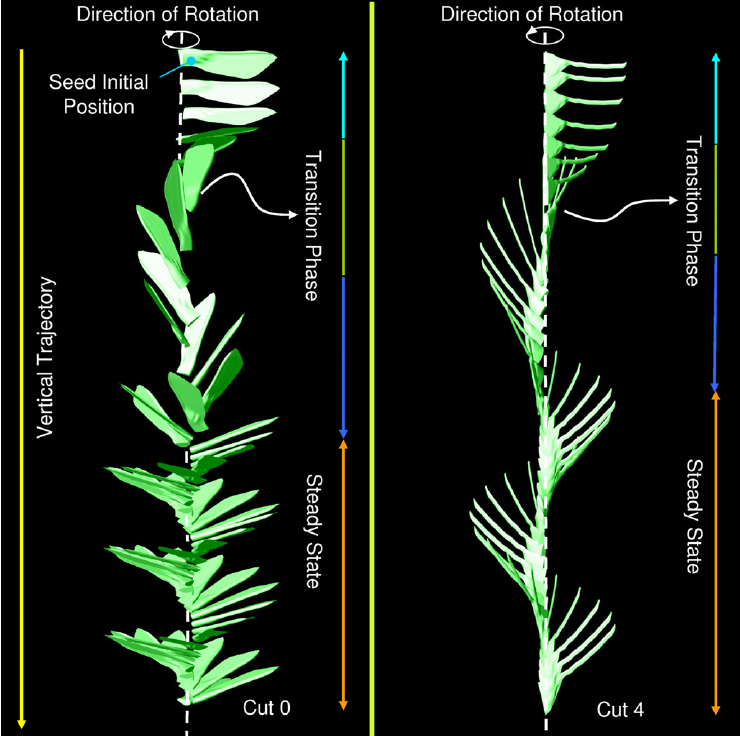 The Drama, that's It.

The Drama is that story being played out in "real-time", suspended within those critical moments of transition... trusting that yes even the most damaged/misshapen/puny/enormous/ugly seed's leading edge, does indeed, have the Life Source encoding necessary for what Life intends.

Q: How does Samara settle into its steady-state spiral descent toward Germination?

A crude analogy of a wind turbine suggests that the torque due to aerodynamic force would initiate the gyration of the seed.

"A surprise came when we cut off much of the wing of a maple seed and found that the seed still gyrated about the vertical axis. This immediately suggests that the cause of the gyration has little to do with the steady-state aerodynamic torque."

"In fact, a seed with only a sliver of leading edge can still gyrate." (However, if the aerodynamic force is completely absent, a seed would fall from rest like a rock in a vacuum.)

The 3 essential ingredients that lead to helical motion.

#First is the "asymmetric mass distribution" of the seed, with the centre of mass "far away from the centroid" of the seed.

#Second is the "aerodynamic damping that initiates a tilt" of the seed which eventually "evolves into a helical motion due to the rigid-body dynamics."

#Third is the "aerodynamic force in the steady state" that "balances the weight of the seed and the centrifugal force." It appears it is "the subtle coupling between the initial aerodynamic torque & the rigid-body dynamics" that distinguishes this case from all the other autorotational mechanisms.

It appears it is "the subtle coupling between the initial aerodynamic torque & the rigid-body dynamics" that distinguishes this case from all the other auto-rotational mechanisms.

We now listen as Samara discovers her steady-state descent towards Planet Earth...

Previous
Who is Samara?
Next
The Origins of Samara

Revisions
Export
Back to top